Hey all! As of today, it’s been exactly a month since the Hytale trailer unveil. As such, it feels appropriate to cast an eye over the last month and address some of the most common questions we’ve received.

Before we get to that, we’d like to give you a further taste of Hytale’s soundtrack - created by our composer, Oscar Garvin.

We hope you enjoy these two tracks! They represent just a small sample of the full Hytale soundtrack.

Firstly, it's an understatement to say we’ve been blown away by the reaction of the community. Our internal goal was to reach approximately 250,000 views during the first week after the reveal with 1,000,000 being our ‘crazy awesome’ best-case scenario. However, here we are a month later at 32,000,000 views on the unveil trailer. Despite having a multitude of backup plans for various parts of the Hytale unveil not going well, we didn’t have any sort of plan in place for the trailer blowing up to this extent!

This greater-than-expected amount of attention has created a few problems that we’re currently solving. For example, instead of getting a few dozen team applications in the first month we ended up getting over 900. In response, we’ve had to implement new software to help us handle this volume of applications.

Obviously, this is an incredibly fortunate position to be in. Many of us have worked on projects that have never received this level of attention in their entire lifespan. Seeing the community’s enthusiasm manifest itself in various ways - like fanart, analysis videos and community groups - is beyond cool. As a group of developers who are community focused, being able to draw energy from your support fuels our development and informs our decision making.

No matter how much attention the trailer receives, however, nothing is more important than the development of the game itself. Our goal is to strike a healthy balance between updating you on the progress of the game and actually developing the game! That being said, let’s get into some of your most frequent questions.

This is definitely the number one question! Simply put, we don’t have an accurate timeline to give you yet - but we can however confidently say that the beta will not launch within the next few months. As we proceed with development we will no doubt gain a clearer picture of the timeline.

Some members of the community have speculated that the beta would be launching soon after the announcement - even in January. However, you may also know that when we announced the game we also announced that Hytale had received substantial investment.

The key reason we sought out this investment was to allow us to develop Hytale without compromising on our standards as developers or your standards as players. We want to avoid feeling pressured to deliver the game too early - and happily, funding from our backers means that we can develop Hytale in the way we want without having to ask our community to contribute or deliver the game before it’s ready.

In hindsight, we definitely could have communicated more clearly about the development timeline. You can rest assured that as we get closer to beta, we’ll let you know. We’re working hard to get there!

What programming and scripting languages does Hytale use?

We’re trying to keep this blog post non-technical in nature. We can say, however, that we’ll be covering some of the high-level concepts regarding modding and content creation in a more technical blog post very soon.

Why is there no official Discord/subreddit/forums yet?

We have two reasons that when combined together made a pretty compelling case for us to not have these just yet.

Firstly, we really want to focus on the development of the game as our number one priority. Maintaining an official Discord, subreddit, and forums generates more work than you might suspect and can distract from development. If we had these things, we’d want to make sure that we were spending the appropriate time looking after them. Right now, that time would be better used making the game.

Secondly, with beta still being a while away, we don’t want our biggest fans to burn themselves out. It’s an effect we’ve observed before in other games: the danger scenario is that the people who are the most excited about Hytale end up tiring themselves out while waiting. This is something we want to be mindful of.

We are of course still listening to feedback. We’re reading everything sent to our social media accounts, fan subreddits and unofficial discord channels. Even if we haven’t officially replied on some of the topics yet, that feedback is valuable to us. One final note is that while we’re generally happy with the resources the community is providing, you should remember that if something doesn’t come directly from us it’s not official. Watch out for incorrect information and clickbait!

Will there be new team roles posted to the jobs page soon?

Yes! We’re finalizing the integration of fancy new software that will allow us to handle the number of job applications we’re getting. We should have that up and running next week, and we will advertise more positions then. If you’re someone who applied already - depending on where you are along the process - then you may receive an email from us to re-apply using the new system. Apologies for any inconvenience this causes.

Is there a mode for free building or creative building?

Yep! There was a tiny glimpse of this in the trailer, but there's also a full suite of optional builder tools that are accessible in this mode. Those tools were developed in direct association with our world team who each have a deep experience of building maps with blocks. There are certainly enough builder tools to have a blog post dedicated to them in the future.

Our original plan was to rely on the pop-up confirmation on the website to confirm the beta signup. However, not getting an email additionally led to some unexpected confusion. The scale of the amount of beta signups also presented a new problem for us to solve. Sometime in the next week, we’re switching to a new system so that sign-ups going forward have a reliable email confirmation that is sent alongside the beta sign-up. For those who have already completed the sign-up process, no further action is needed. Alongside the first newsletter, you’ll also receive confirmation that your beta signup was received.

Will Linux be supported?

We have no plans at this time to officially support the game client on Linux. However, we can confirm that Hytale’s server will run on most Linux distros (more details on which to come later).

What languages will Hytale support?

Hytale will include multiple languages at some point during beta - we don’t have information to share on which languages and when. We’ve previously used crowdsourced community translations in the past to good effect. This is something we are considering doing again.

We’ve seen a lot of people unofficially translating our posts into other languages and we just want to take a quick moment here to say thank you to everyone who has been doing that. It’s been really helpful.

Will you support the game after beta when it's fully released?

Yes. For years to come, we plan on supporting the game with new features, content updates and more.

We noticed that since last week’s worldgen preview - there were a few incorrect conclusions regarding how the map works, we think this is because the “zones” concept art presented the world in the form of slices. We want to clarify that the zones are not laid out like concentric circles.

You can think of worldgen in the shape of a traditional world map. The map continues to generate in the infinite lands with all of its normal features except a few storyline content prefabs.

The video player is designed primarily for YouTube and Twitch. For the purposes of the unveil we weren’t clear of the requirements that we needed to meet in order to show the YouTube player in the trailer - so we opted to use our own custom video player. This is another feature that will no doubt get its own blog post sometime.

See you for the next blog post - and in the meantime, enjoy the music! 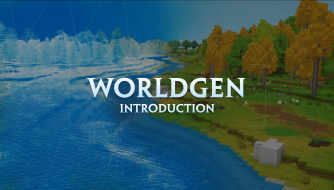 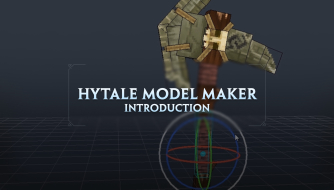