Music plays a vital role in establishing the mood for your adventures across the world of Orbis. Over the last couple of months, we’ve provided a few opportunities to sample Hytale’s soundtrack. Back in January, we released two full tracks - Traveling Band and Night on the Dunes - which set the stage for your journey. Then, in our key art showcase, we chose samples from some of Hytale’s ambient music to match the mood of each piece.

Today we’re releasing three new tracks from Hytale’s soundtrack, along with developer insight into how each was composed and how they fit into Hytale’s adventure mode.

“The music is written in Logic Pro X using sample libraries and a MIDI keyboard” explains composer Oscar Garvin. “I can load up a violin on my computer, for example, and play it with the keyboard while adding dynamic change using a modulation wheel. I have to play in every single instrument and stack them on top of each other to make a full piece. The composition aspect is often the easiest part - I usually spend most of the time finding the right instruments that work together so it all sounds as nice as possible. The good thing about game music is that there are fewer rules - and you can get quite creative with Hytale because it’s a fantasy world.”

This piece accompanies your initial adventures through zone 1. Appropriately, it was also one of the earliest pieces that Oscar created for the game. “This is the first exploration piece I wrote for Hytale and it’s gone through a bit of change since its first rendition” Oscar says. “It remains one of my favorite pieces because it brings me back to those days when I first joined the team and got to explore Hytale for the first time. I wanted it to feel like you are embarking on a new journey through the magical glades and breezy plains of zone 1.”

“From the beginning I decided that I didn’t want the music to loop for the most part” Oscar adds. “Since the world is procedurally generated, I can’t know exactly where the player will be or what they will be doing, but I wanted it to feel cinematic. In the vein of movie soundtracks, I tried to create changing moods that make the player feel like they’re on a journey.”

Zone 1 provides a (mostly) sunny start to your adventures in Orbis.

A New Adventure is an example of a track that might play as you’re exploring zone 1 during the daytime. As such, it features motifs that reflect specific elements of this region as well as broader themes of adventure and discovery. “I have to try and imagine the general mood of the area that reflects what you see, while hinting back at the overarching feel of the game - the main themes that make the music feel specifically like Hytale” Oscar says. “Exploration music is also split into two ‘schools’ of more active music and more ambient music. In the overworld, music is chosen from a list of tracks, so you’ll have a varied experience every time. The music may also change based on the weather and time of day.”

The title of this piece tells you everything you need to know about its place in Hytale. Kweebec Village is the soundtrack to the various Kweebec settlements you’ll encounter in zone 1, and its tone and instrumentation reflect the personality of the Kweebecs themselves.

“When I wrote the Kweebec Village theme I knew it had to be cute, light and playful” Oscar says. “Much of the instrumentation and harmony draws on my JRPG influences. The piece sounds like a small ensemble to create the sense that the Kweebecs themselves might be playing this tune as you walk into the village.”

Kweebecs are welcoming folk, but don’t show up in their villages wielding an axe!

“The piece incorporates ornamentation like trills and other playful embellishments to the basic melody to make it feel fun and carefree” Oscar adds. “There are also orchestral elements that thicken the sound, as if the Hytale soundtrack itself is getting behind a small Kweebec band. I usually perceive the music as if someone is playing it, often viewing the instruments as characters in the story.“

Hytale’s music helps us to tell the story of Orbis - indeed, the themes being expressed in any given piece reinforce specific elements of the lore. “I made use of the main Hytale motif as a key building block when creating this melody for the very reason that the Kweebecs are important to the story” Oscar says.

Like A New Adventure, Gaia’s Lament is an exploration piece - but one that covers a different location and addresses a very different set of themes and emotions. “With this piece I wanted to focus on the lonely wasteland aspects of zone 2” Oscar says. “The piece evokes a barren desolate expanse, as well as introspective feelings of pain and regret.”

“I enjoy writing four part harmonies, which I’ve used here to evoke a sort of classical requiem feel towards the end of the track” he continues. “I also began experimenting with space to create a sense of a vast, lonely environment. It required some restraint, stretching material out over time and literally leaving open spaces in the music. This is particularly evident around 2:30, with the lonely flute crying out into nothingness.”

Why is it called ‘Gaia’s Lament’? You’ll just have to wait and see!

Gaia’s Lament illustrates the sort of contrasts we’re hoping to create within Hytale’s music, art, and story - from cute to epic, outgoing to introspective, upbeat to imposing. Despite this tonal range, however, one of the jobs of the soundtrack is to ensure that it all comes together to form a coherent whole.

“It’s important to me that the soundtrack has a sense of musical unity” Oscar says. “I’ve done this not only through themes, but by using the same instruments to create the ‘Hytale sound’. Each area might have its own identity, but there’s also an overarching sound that binds them all together. Most tracks include several themes that link to lore and location, as well as the main themes which glue everything together. Like a cue in a movie, a lot of the music might develop to end up somewhere very different from where you started - just like you can in the game.” 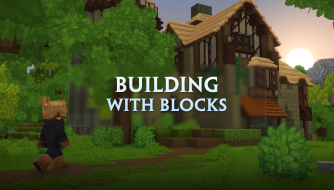 Building with blocks in Hytale 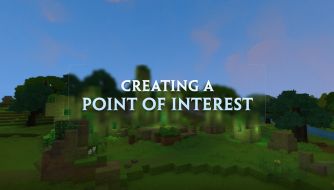 The creation of a new point of interest for adventure mode