Hi everybody! Today we're going to celebrate another set of incredible pieces by the Hytale community. Thank you so much to everyone who has invested their time and energy into making things inspired by our project. It's important to us that Hytale is a game that inspires and empowers its players to express themselves, and so it's amazing to see so much creativity from the community while the game is still in development.

This is only a sample of the wide variety of fan work that the Hytale community produces every week - and we're tremendously grateful for all of it! Make sure that you tag your own pieces with #HytaleFanArt to make sure that we see them.

We'd also like to remind you that we've been posting a new screenshot to our Twitter account every week! If you've missed any of this month's updates, make sure to check them out. 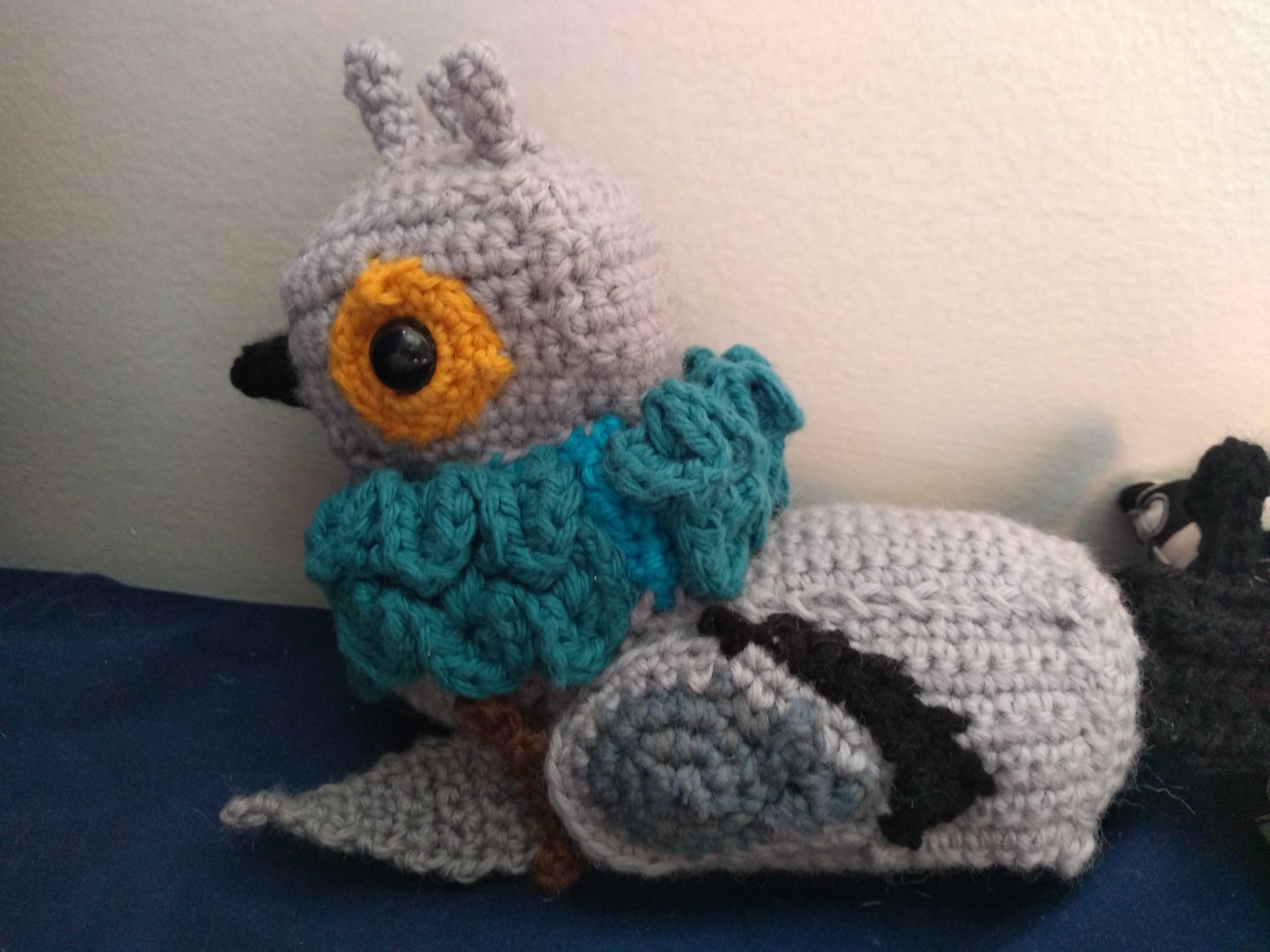 It wouldn't be a Hytale fan art showcase without at least one pigeon-with-knife! We had no idea that this particular combination of unassuming bird and throwing weapon was going to resonate so strongly with the Hytale community, but we're very happy that it has. We feel that this adorable crochet project by Lillith Griffin captures both the pigeon's plump dignity and the razor-edged readiness for action represented by its ever-present blade.

"I had tried drawing Hytale fan art before, but I was never very good at it, which led me to trying to replicate the pigeon in my own 'style': crochet. Now that it's complete, I'm pretty happy with the results and may make a Mosshorn sometime in the future." 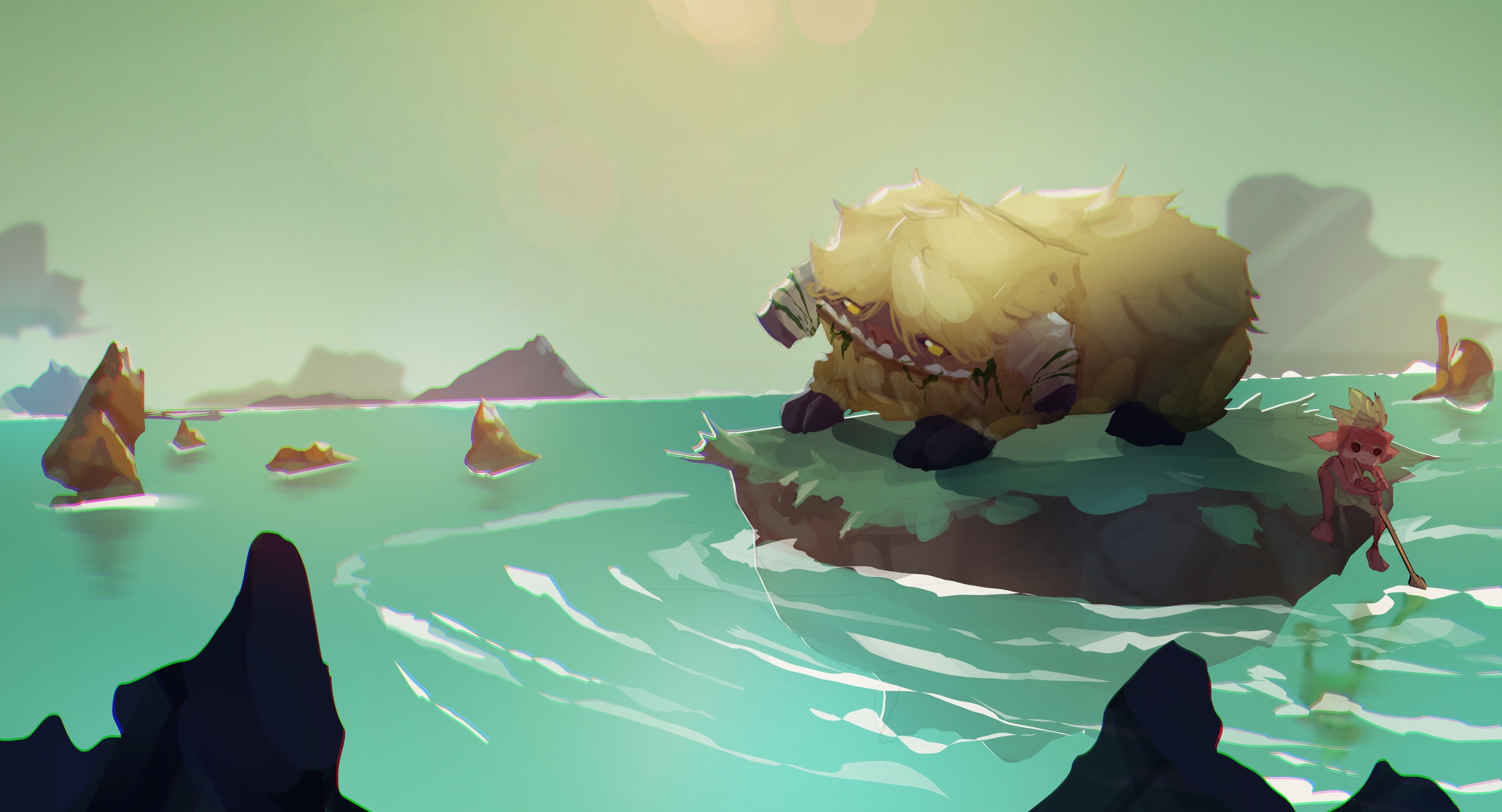 It's only been a few months since we introduced the Mosshorn to the world, and we've been delighted by the community response to this strange, hardy bovine. Community artist DairyPanda painted this lovely scene of a serene Mosshorn being paddled home by its Kweebec buddy.

"I was inspired by the fluffy beast dynamic of the Mosshorn, and how it could have a side to it where it's lost in its own ways. I felt like it'd be fun to explore vulnerability within the creature." 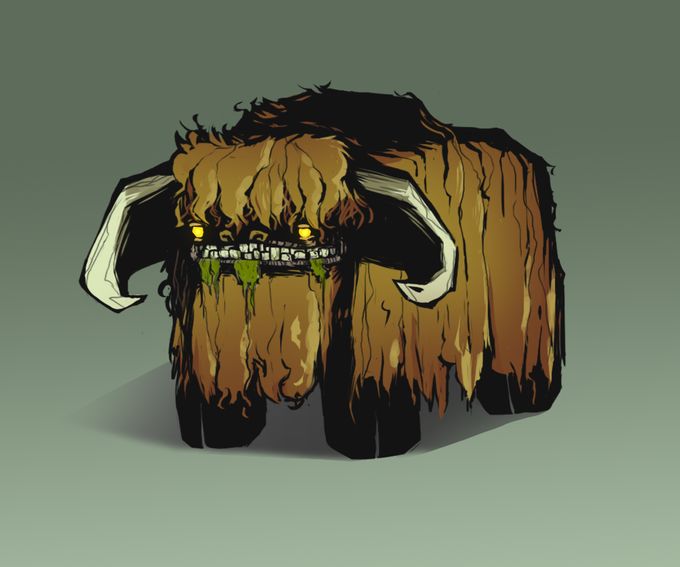 Clearly, there's something in those beady little yellow eyes and that wide, toothy grin that resonates with people. We also enjoyed this rendition by Ez3z, who captures the Mosshorn in its natural state: staring into space.

"I love the Mosshorn's design, so when I saw it I had to draw this new friend." 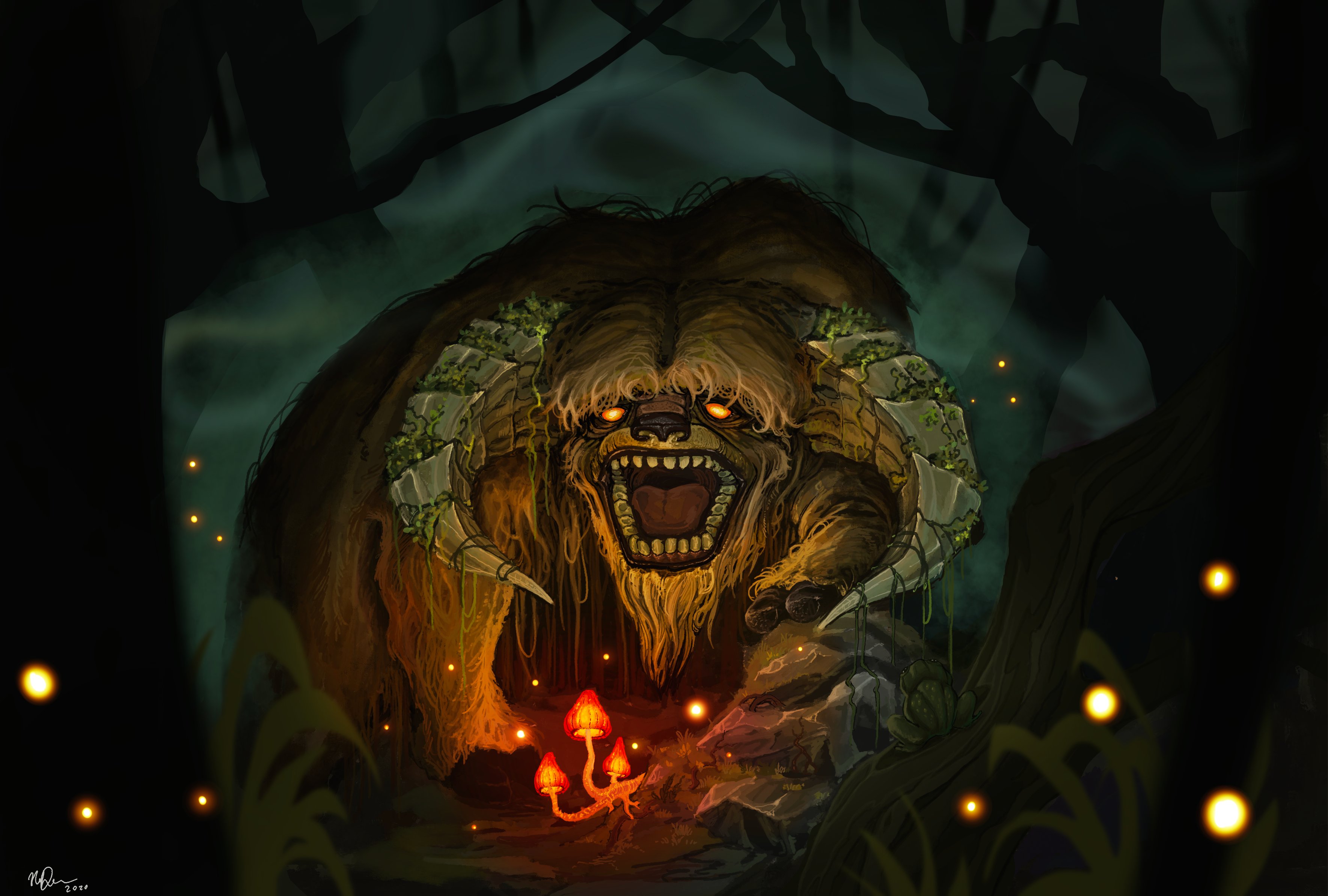 This vivid depiction by RighteousPebble casts our Mosshorn friend in a dramatic light, managing to capture both the monstrosity and the mellowness of this bellowing beast. Is it yelling or yawning? Impossible to tell. Can't it be both?

"My biggest regret these last five months is not doing more Hytale fan art. Whenever I'm doing something Hytale related, I always find myself in a better mood. The whole vibe of the game is just so fantastical and pleasant. Life has made it tough recently, but i'm hoping I can really get back into it in the next couple of months. The Hytale community is doing all it can to keep the hype at a nice warm sizzle, and I think that's healthy and beneficial for everyone. That being said... Noxy, if you wanna slip me a black market copy of the Hytale Model Maker, I would give one of my lungs and both of my kidneys gladly." 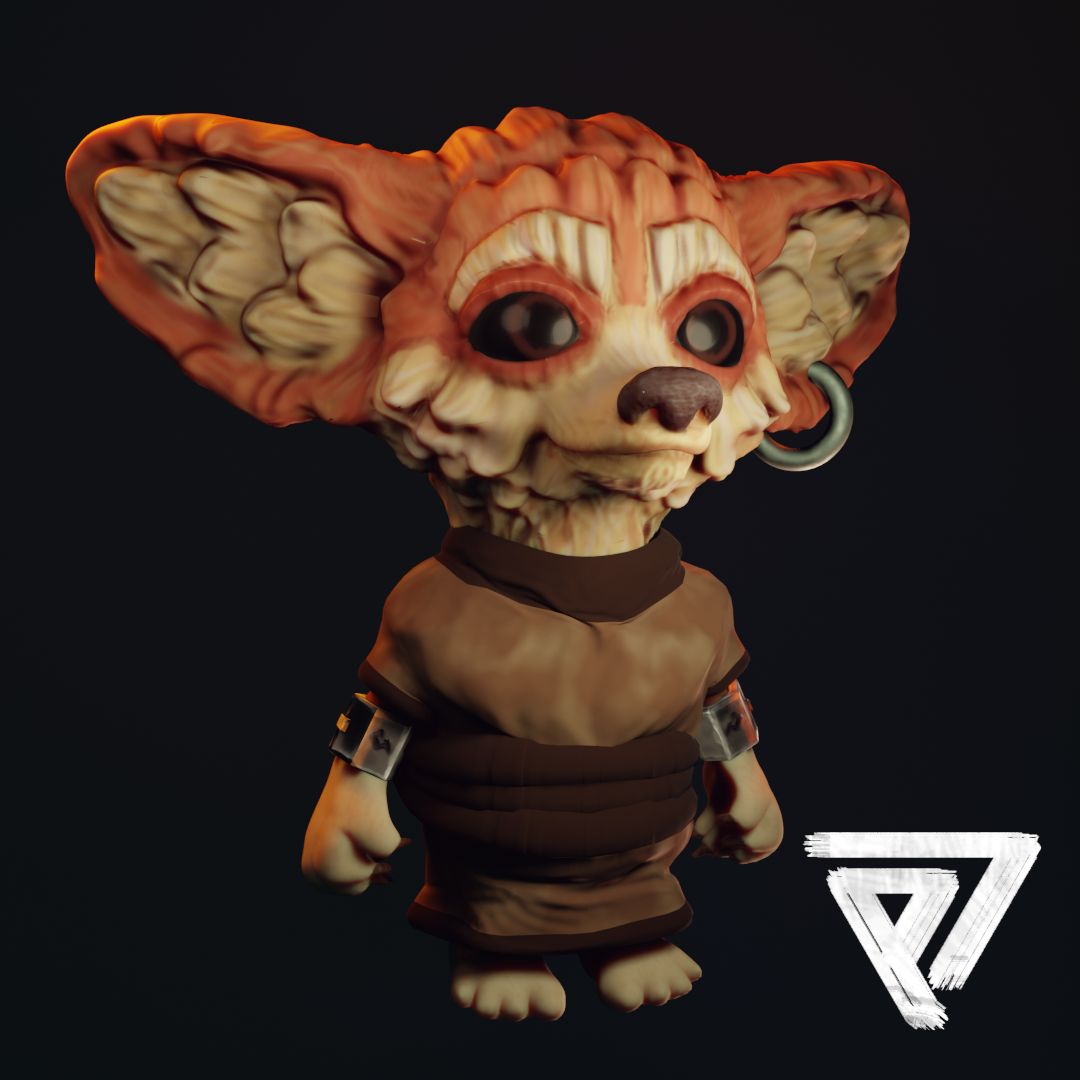 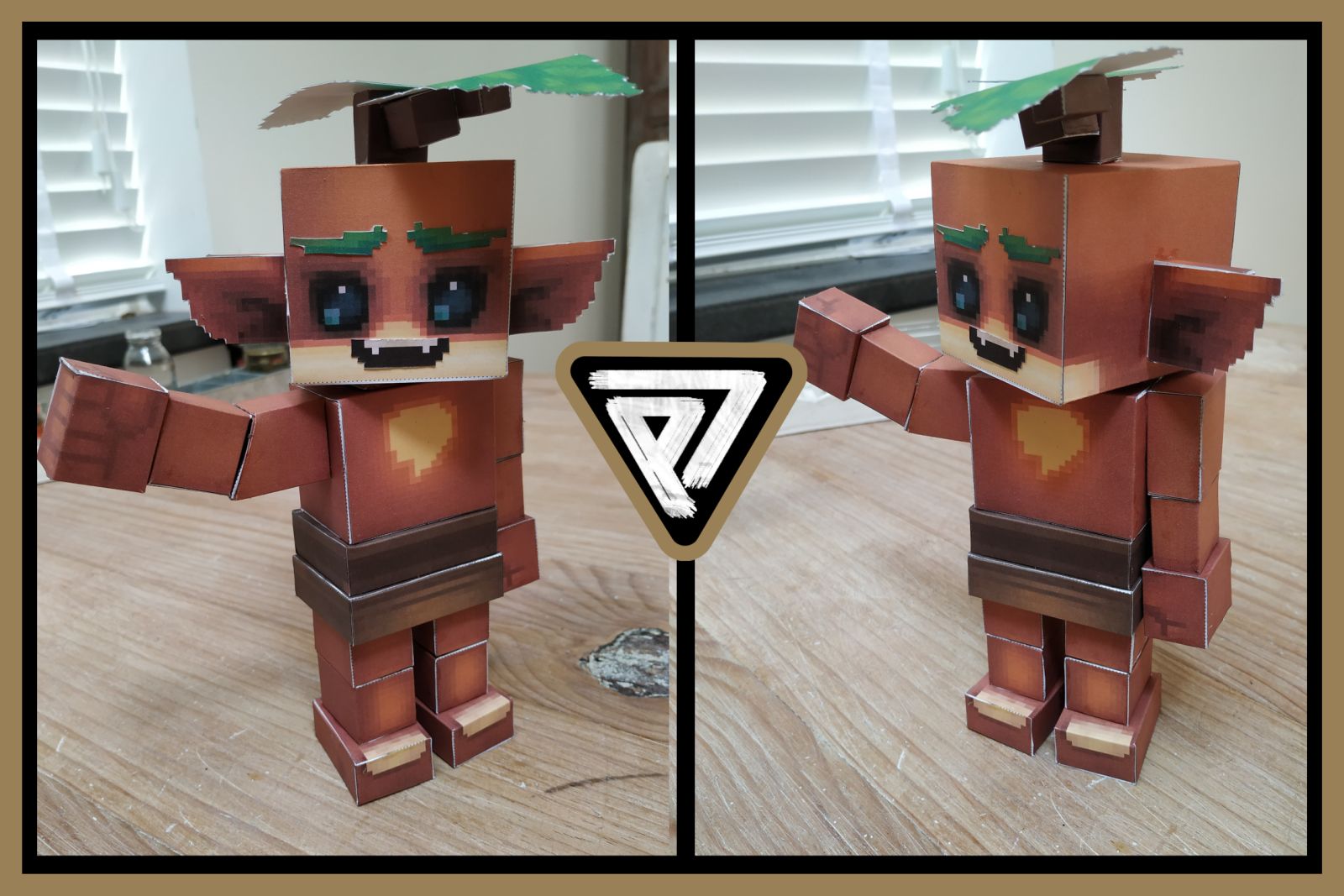 It's always exciting to see Hytale characters brought to life outside of the context of the game, and this hi-res rendition of a young Feran by Powerbyte7 brings these desert-dwellers to life in a way that we've not seen before.

Powerbyte7's papercraft Kweebec is an equally impressive, though very different, bit of work - taking Hytale's art style and translating it directly to the real world! They've even provided a PDF template if you'd like to build a model like this for yourself.

"I love making all sorts of 3D creations and experimenting. Hytale's art and modding capabilities are a big inspiration for me. Considering all Hytale models consist of cubes, I figured I'd turn one of the creatures into a paper model. I chose a Kweebec because the clean design helps with the creation of a template. It took some time, but now he's happily sitting at my desk!

The Feran model was made in Blender. I wanted to sculpt a stylized character from a concept, and the young Feran seemed like a fun challenge. Overall I'm quite happy with the two pieces, and I learned a lot on the way. Hytale will have a lot of room for experimentation, and I can't wait to try it out!" 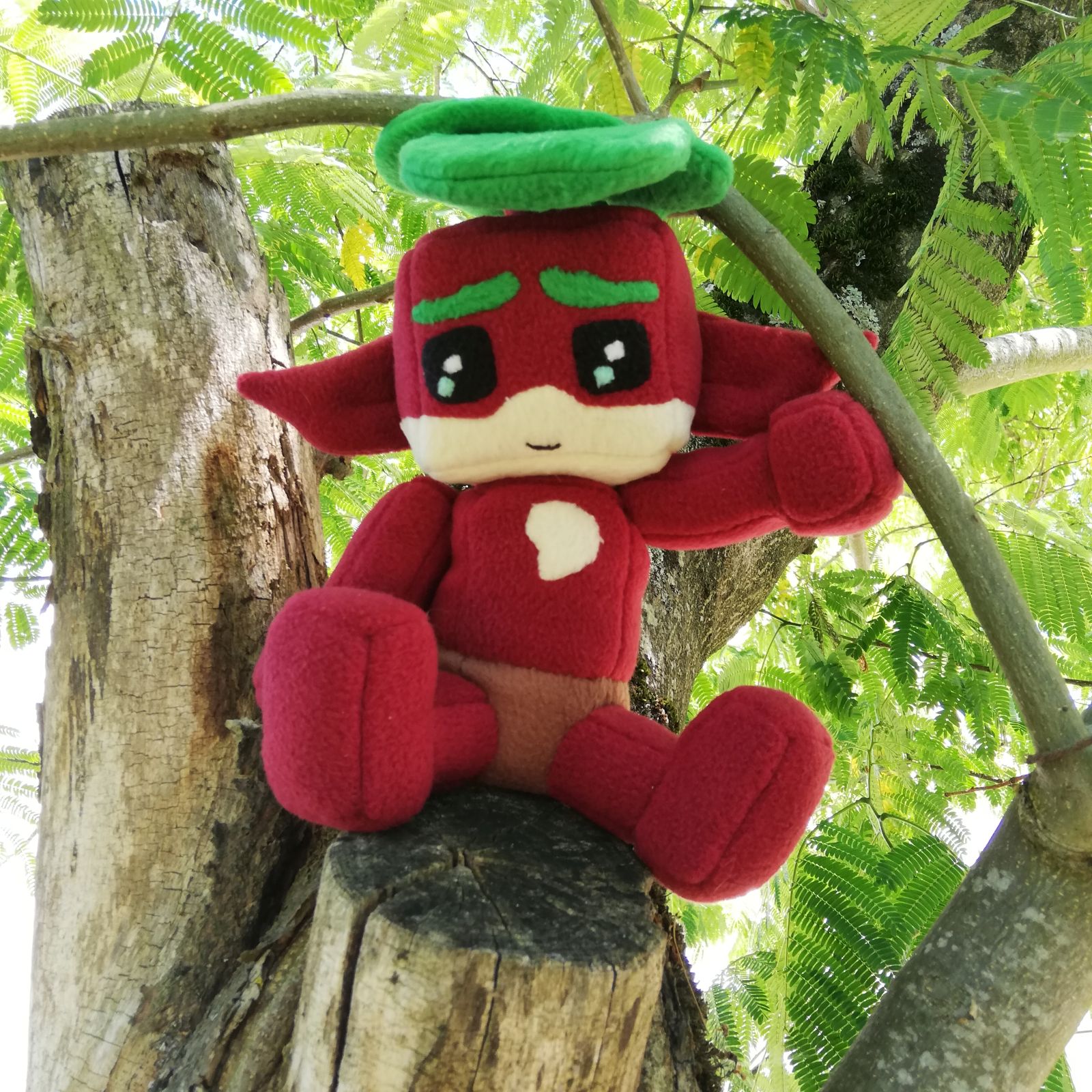 We were blown away by this professional-looking plushie created by Malicxel, whose partner is a member of the Hytale development team. The proportions and expression are all perfect, and now we all want one.

"I've known Hytale for a few years now and for good reason, as my partner is working on the project. I fell in love with these lovely Kweebecs the first time he showed them to me. So cuuuute! How can I hug them? Plushies!

I started sewing in 2012 to make myself another cubic plush because it didn't exist on the market at that time, and I discovered a passion for sewing. Even though I make less plushies today than before, I'm glad that I was able to give my partner his very first Hytale plushie." 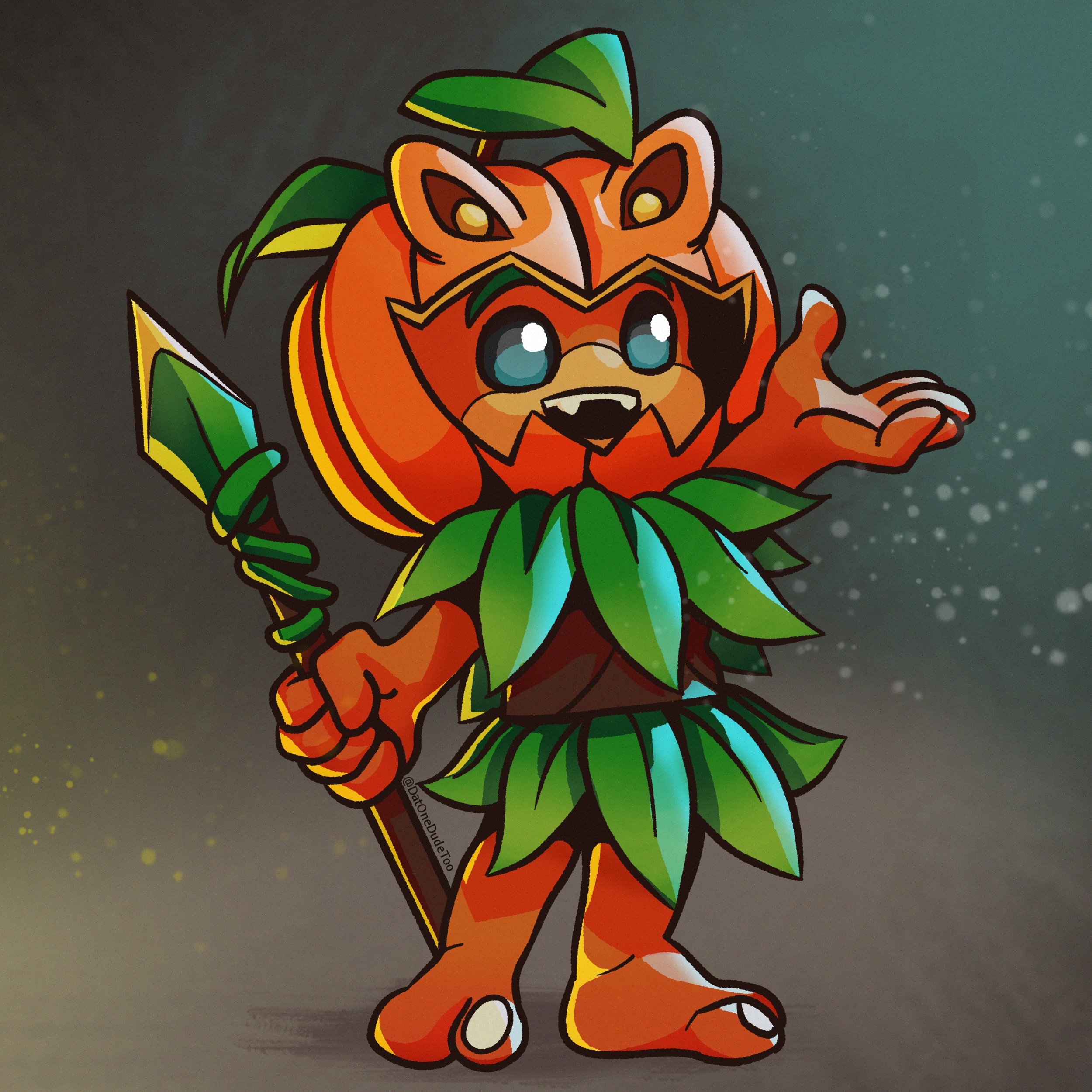 We've seen some really fun Kweebec variants over the last couple of months, and we particularly like this clean, characterful drawing of a Halloween Kweebec by TheGuyYes.

"Ever since I saw Kweebecs in Hytale, I knew they'd be my favorites! (Only second to Ferans, perhaps.) I decided to combine one of my favourite races with one of my favourite celebrations, and so, Halloween Kweebec was born! I even used as reference the carved pumpkin that appeared in the Hytale Happy Halloween card!" 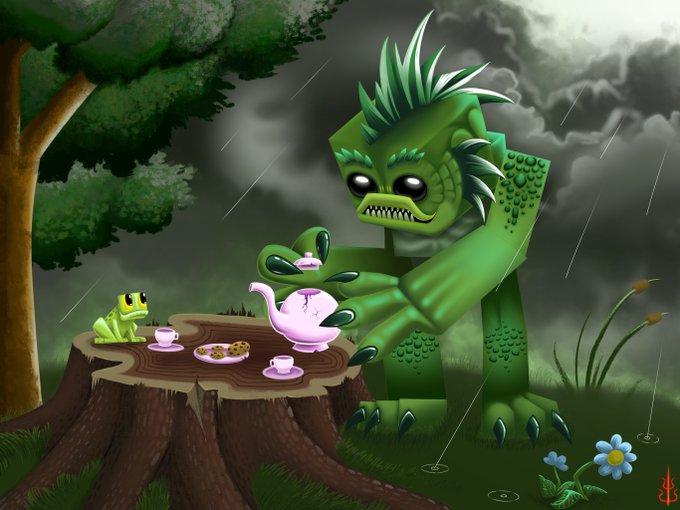 Arcanadragon has done lots of super creative Hytale art, but we particularly like this adorable expression of the friendship between frogs and Fen Stalkers!

"One of Hytale's blog posts revealed that Fen Stalkers are friendly towards frogs. This was so adorable and I knew I had to capture it in my fan art! I love the little details the Hytale team adds to give their monsters so much personality, and I can't wait to meet them in-game." 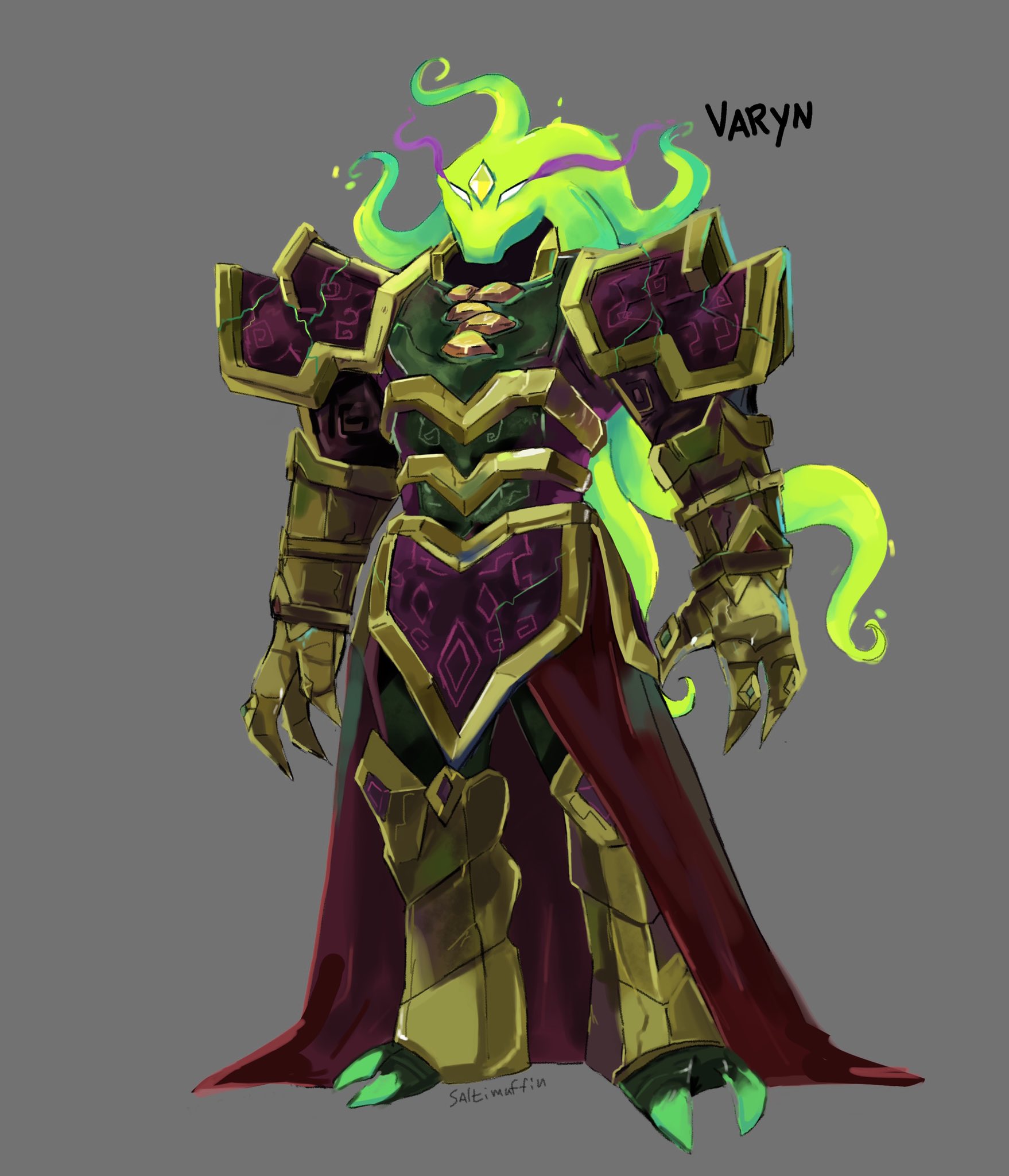 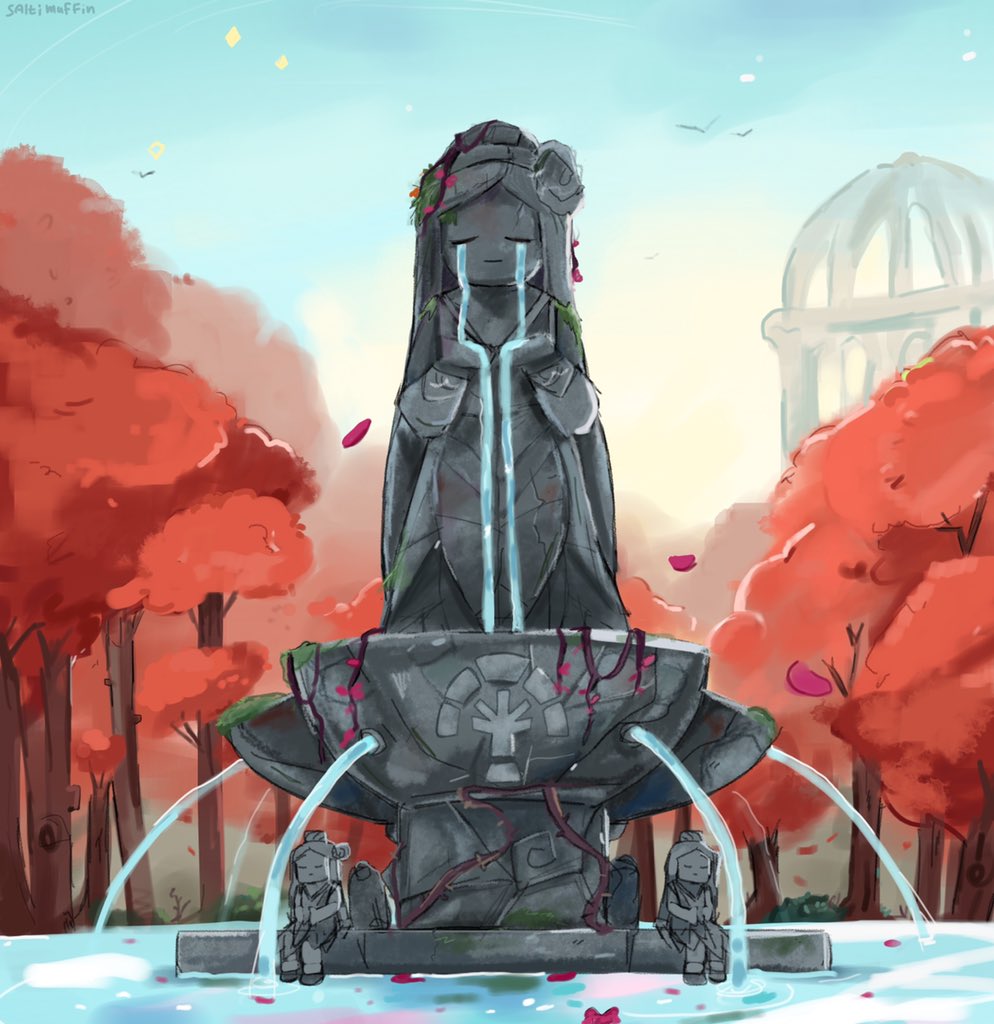 These two pieces by Saltimuffin each capture the essence of different aspects of the world of Hytale. We really like how imposing this particular depiction of Varyn is, and the atmosphere and attention to detail in the fountain painting is spot-on. The juxtaposition of fall leaves with Gaia's weeping statue is wonderfully expressive!

"I always dreamed about a fantasy block game. The Hytale trailer dropped from nowhere and I was so impressed seeing my dream come true! I can't wait to explore the world of Orbis :D" 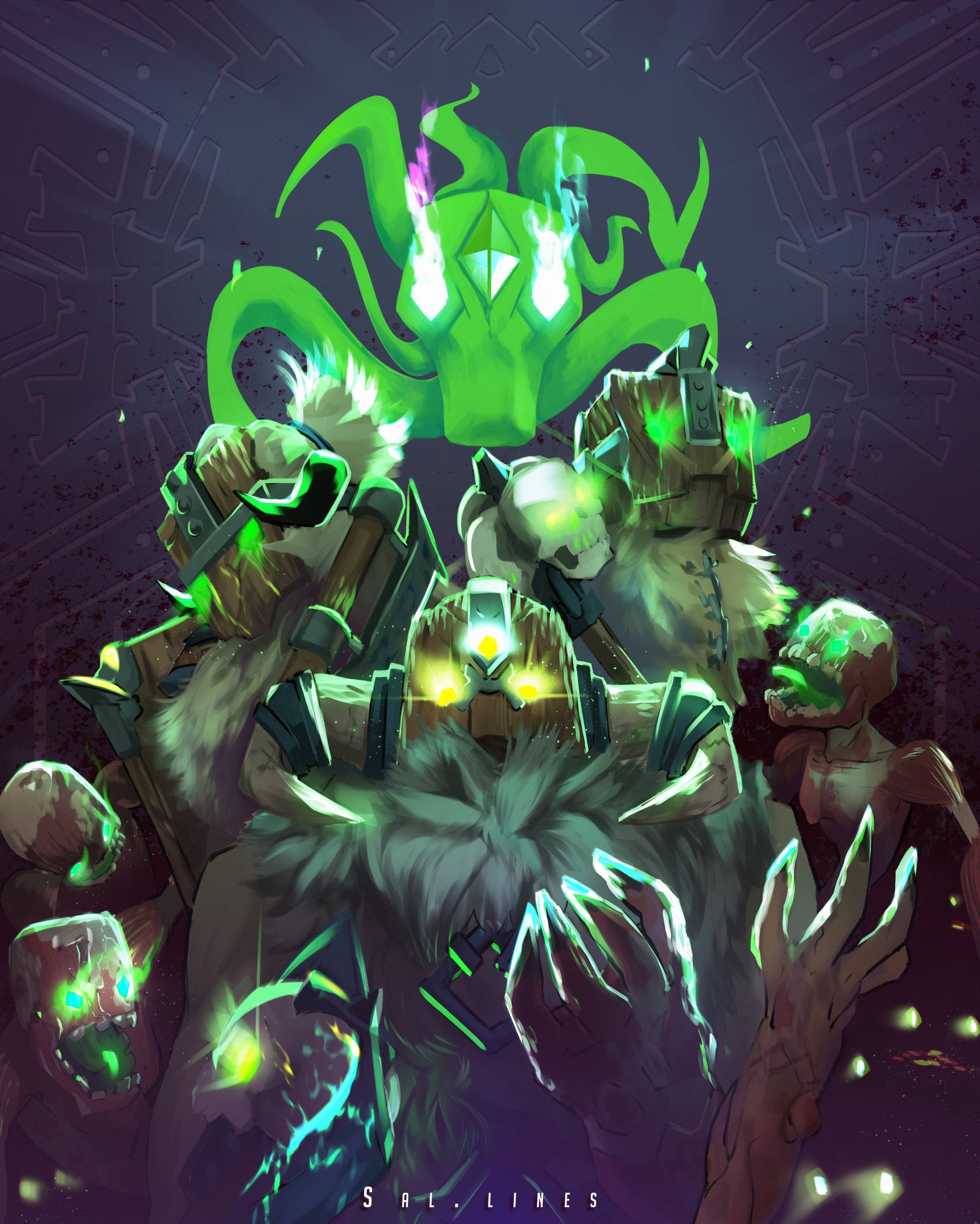 This fantastic piece by Sal.Lines feels like a movie poster!

"This piece is a collection of the Hytale community's theories about the Crawlers and their relationships to the Outlanders and Varyn."

It's been really great to see the community engage with the Hytale universe and express their own theories in such creative ways. While the answers will need to wait until players start exploring Orbis for themselves, we can say that we find the depiction of ethereal power and grim hierarchy in this image pretty compelling! 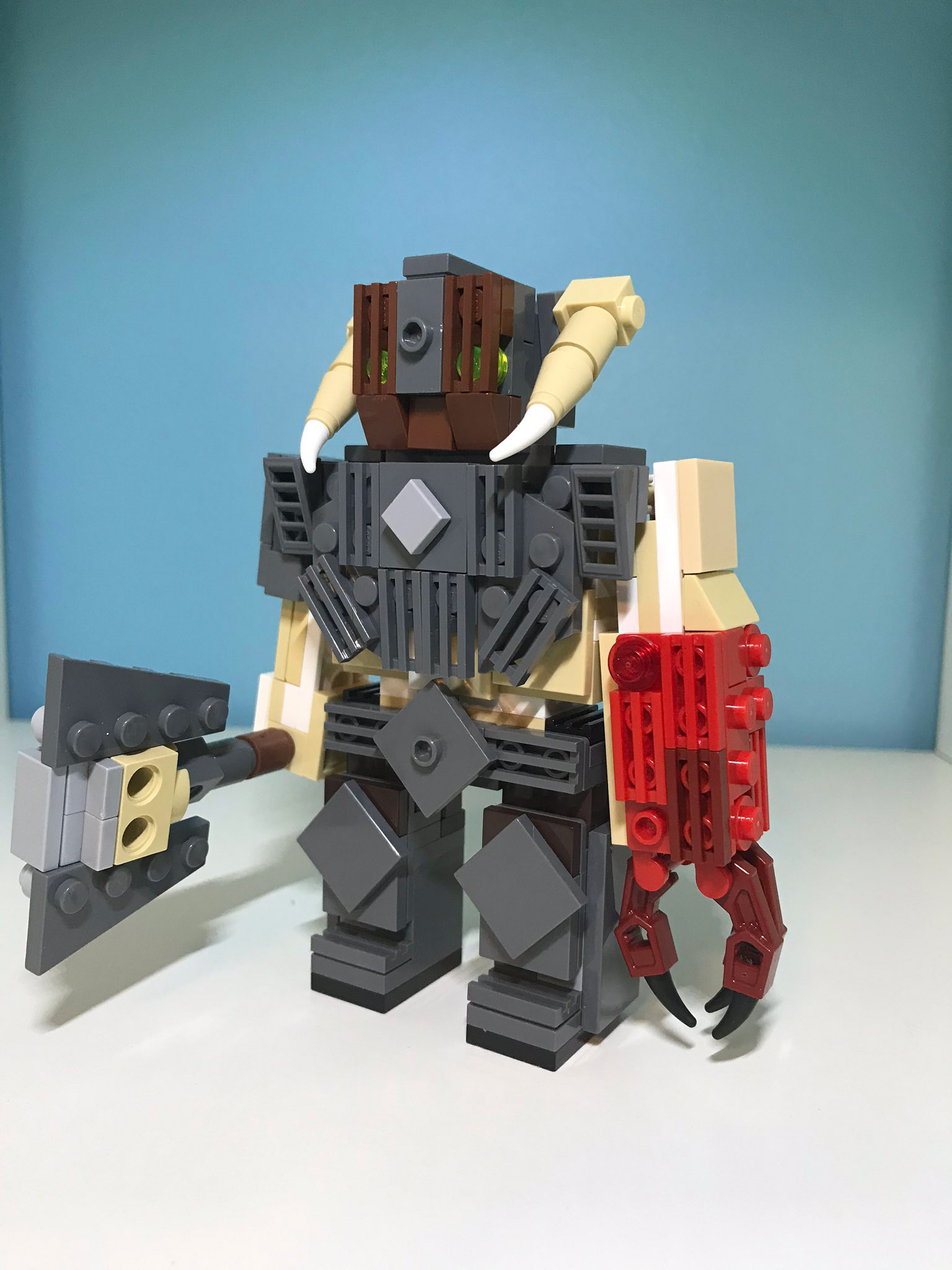 We've showcased LEGO builds by HappyLemur in the past, and this is a particularly impressive new example. We particularly admire how HappyLemur has been able to capture many of the fine details of the ingame model, including the glowing eyes behind the mask and the coarse materials that make up its brutal weapons and armor.

"I was inspired to make the Outlander Colossus from LEGO because of how formidable and threatening he looks. I try to make my builds as accurate as possible to the real model using the pieces I have access to."

On behalf of the whole team, thank you once again to everybody who has made and shared their Hytale fan creations. Remember tag your work with #HytaleFanArt for a chance at inclusion in a future showcase!